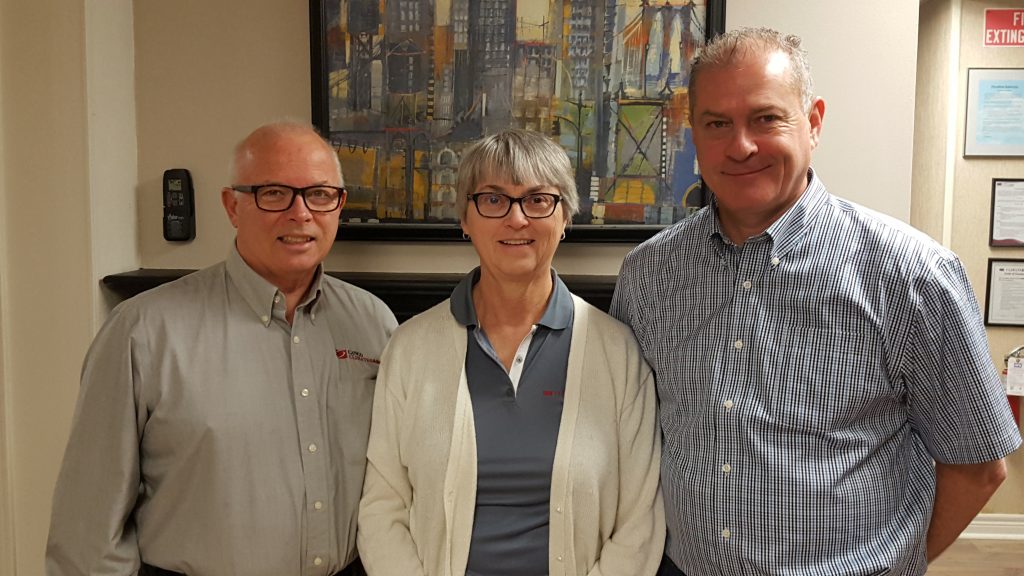 In January 2014 NCI spotlighted the performance-based contractor mission that Canadian HVAC company Canco ClimateCare‘ started embarking on. At that time, we focused on how owners Bob and Nancy McKeraghan were evolving their business ‘ from a technical as well as a management standpoint ‘ to keep pace with and surpass the revolution happening in the HVAC Industry. A lot of those changes revolved around the impact the Internet was having on the then-30-year-old firm.

As Nancy told us at that time, ‘Because of the Internet, and instant access to information, our customers today are better educated and informed than ever before, and they understand their options. Customer loyalty, as we once defined it, is a thing of the past.’ The challenge now is that we really have to earn that loyalty by keeping customers informed, offering them value, and most of all being honest and upfront with them.’

Back in 2014, Canco’s annual revenues hovered between $1.4 and $1.6 million and concentrated mostly on the residential retrofit marketplace, with some dabbling in the commercial service sector. Today, McKeraghan says they are breaking the $2 million mark with 16 employees and nine trucks on the road. She attributes much of that growth to the new path they started on in 2014 – Performance-Based Contracting?.

From a marketing standpoint, McKeraghan says that the company really began investing in partnerships three years ago and today, those relationships are still as strong as ever. These include ClimateCare (a network of independent Canadian HVAC contractors formed in 1992), the Heating, Refrigeration, Air Conditioning Institute of Canada (HRAI), and National Comfort Institute (NCI).

She adds that Canco’s NCI affiliation gives them a wider HVAC Industry perspective as well as training in the tenets of Performance-Based Contracting?. ‘We’ve really been working hard to become a performance-based contractor here at Canco.’

The fact is that Nancy McKeraghan has become somewhat of a persuasive cheerleader regarding PBC. She tells a story of one of their newer partnerships ‘ with a local utility, where she always preaches the importance of PBC to the industry: utility, manufacturers, distributors, and consumers alike.

‘I have been talking to this utility for a long time, explaining why they need to get on board with some of the new technology and new programs that are available rather than just offering rebates,’ she explains.

The result of her ‘yapping,’ as she calls it, about PBC was a recommendation by the utility on a major low income housing renovation project that resulted in $500,000 worth of work for Canco. ‘Plus, we have already been approached by another local government agency to quote a project for them,’ she says.

‘It’s very interesting because when I speak with our competitors and our friends in the industry, most of them say business is really off. In the Toronto area, our winter has been non-existent. In fact, we have green grass now. But while most of the other HVAC contractors are quite slow, we are going gangbusters,’ she adds.

‘I feel our efforts to become more performance-based is one of the reasons we are having a great year.’

Like their counterparts here in the U.S., finding good field service and installation people isn’t easy. To battle that, Canco has had in place a program they use to attract young people into the HVAC universe. Bob and Nancy McKeraghan are involved in Skills Ontario — a Canadian association that helps prepare Ontario’s youth for what they call the ‘highly-skilled economy of tomorrow.’

Skills Ontario provides a showcase for a competition. They feature HVAC theory, hands-on technical ability, troubleshooting, plus written and verbal skills. The McKeraghans partner with Skills Ontario to not only help that group with their mission, but to find young people interested in careers in HVAC.

In addition, the couple have been invited to do college presentations and to attend career fairs and talk to students. They offer co-ops at Canco and Nancy says they seem to be the go-to company for young people to get co-op positions.

HVAC As a Career

Nancy says the HVAC trades remain a very strong career option. ‘The sophistication of the equipment, the technology, and the available opportunities, make HVAC a really viable option. Many of the young people coming into this trade tell me they get a real sense of satisfaction because they feel like they are helping people,’ she says. ‘When they arrive on a no-heat job and then leave with the customer ecstatic about having heat, it really feels good to many of them. Also, many young people really love to solve problems and they love to use technology to help with that.’

She adds that by being involved in Skills Ontario, and some of the other recruitment efforts they are committed to, Canco has access to many of the young kids. If they are lucky enough to hire one of them, Canco can then begin molding them through continued training into technicians who will have no problems with the concepts of performance-based contracting.

‘Plus,’ she adds, ‘you don’t have to “un-train” bad habits learned from working elsewhere in the industry.’

With the average age of field technicians in this industry being in the mid to late 50s, it really isn’t that long of a time before their retirement. Combined with how few young people even know about or become part of the HVAC Industry, the availability of talented technicians will drop dramatically in just a few years.

‘The HVAC Industry is its own worst enemy,’ Nancy says. ‘I hear contractors complain all the time that they can’t hire decent field technicians.’ But they are first to claim they don’t have time to host college or high school students who want a co-op. I feel very strongly that we can bring these kids in as co-op students and excite them about the industry. Then we can fire them up to complete their training. Then they become wonderful employees to have.’ Unfortunately, a lot of people don’t bother to put the time and energy in to work with them.’

The McKeraghans are very strong believers in continuous education. Nancy was a school teacher in a former career. Bob McKeraghan himself is an excellent technical trainer and often trains his crews himself. In addition, the company invests heavily in external training, much of it with NCI. They not only send their technicians to classes, but they also bring trainers in. Most recently they hosted NCI’s Jim Davis.

Will Horner, Canco’s sales manager is an example. He holds 10 certifications for NCI, HRAI, as well as several other training organizations. Horner says that most of the technicians at Canco really like the training. He says they often are thankful for it and anxious to apply what they learned in their daily work.

‘I think training gives them confidence and assurance that what we are doing in the company is the right thing to do,’ Horner explains.’ ‘It gives them the confidence to be able to handle situations that they might not have been comfortable handling before.’

Canco budgets around 3% of their revenue toward training ($35,000 to $40,000 annually). This demonstrates their commitment to continual improvement. Training goes beyond the technical as well ‘ the firm takes advantage of soft skills training provided by the local Chamber of Commerce. This includes business courses, marketing, computer courses and more.

The Path to Duct Renovation for the Performance-Based Contractor

Both Horner and McKeraghan say that they’ve been interested in a systems approach to HVAC contracting for many years. Canco was a member of the International Service Leadership (ISL) before NCI bought them. They became familiar with NCI’s approach to PBC through the subsequent Summit meetings.

‘We get so much out of the NCI conferences,’ Nancy McKeraghan says. ‘If we didn’t believe in NCI and the positive impact that Performance-Based Contracting has and will continue to have, Canco would not be part of their membership.’

‘System renovations is the key for us,’ adds Horner. ‘It is part of the sales process that we have implemented.’ I found that doing the performance testing leads right into renovation. One job that we won over two competitive bids was directly due to my doing static pressure testing. I did a standard test and ended up getting the job, even though I was $3000 higher on the air conditioning alone. Plus, we got another $5-6 thousand for additional duct renovations.’

Horner says that job came in at $12,000.’ ‘Many of our duct systems are buried in drywall ‘ you can’t really access them,’ he explains.’ ‘This leads to some really great sales.’

Communicating with the Market

Even with their success, Horner says the biggest problem they have is taking the performance-based contracting concept to the marketplace. ‘The truth is that very few people know about it and are talking about it,’ he says. ‘That makes it a tremendous challenge.

One tool that helps the Canco sales team close renovation sales is an NCI-produced consumer-focused brochure (you need to be logged into the NCI website to access this file). It explains the six-step testing process. Horner says that brochure makes sense to consumers. ‘I can often see the light bulb go off in their heads and then price is not the only thing they’re interested in.’

But from a marketing standpoint, Horner says they are still trying to figure things out. He explains that they use the consumer brochure. Plus his field personnel talk about duct renovations with customers. But he feels that isn’t enough.

‘It’s a challenge to get the home performance message out there,’ he says. ‘Homeowners think they are just buying a box and our competitors perpetuate that belief. That’s all homeowners know what to ask for.’

Despite the challenges, Canco does close duct renovation and home performance sales. Both Horner and McKeraghan say that most of those customers are thrilled because they can see their systems are delivering the comfort and efficiency they are supposed to. How? Canco does before and after testing to prove it.

Nancy McKeraghan says, ‘Last year we sold a customer a complete system. She called us two days later to thank us. She said she never slept as well as she did in the last two nights in the house.’ She said she just couldn’t believe the difference we made.’ What else can you say but thank you.’

In the end, Both McKeraghan and Horner agree. The right thing to do is to continue their pursuit of becoming a full-fledged Performance-Based contracting company. Their membership in NCI is a strong reason for this attitude.

‘There is strength in numbers,’ McKeraghan says. ‘You need to belong to organizations that understand the industry. They must work hard to help you grow your business and do the right things for your customers. NCI offers those opportunities. We are in it for the long haul. We can really make a difference in customers’ lives.’ What a great thing to be able to do — solve customer problems and be a hero. The performance-based contracting approach has helped us to grow as a company, as individuals, and as professionals. We have grown because of the classes and the information we have gained through NCI.’ 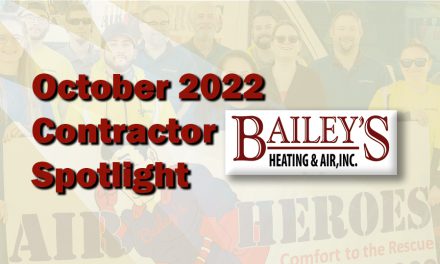 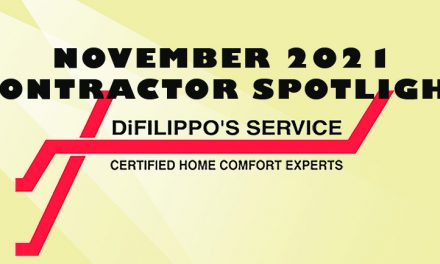 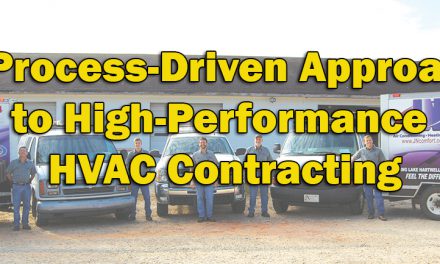