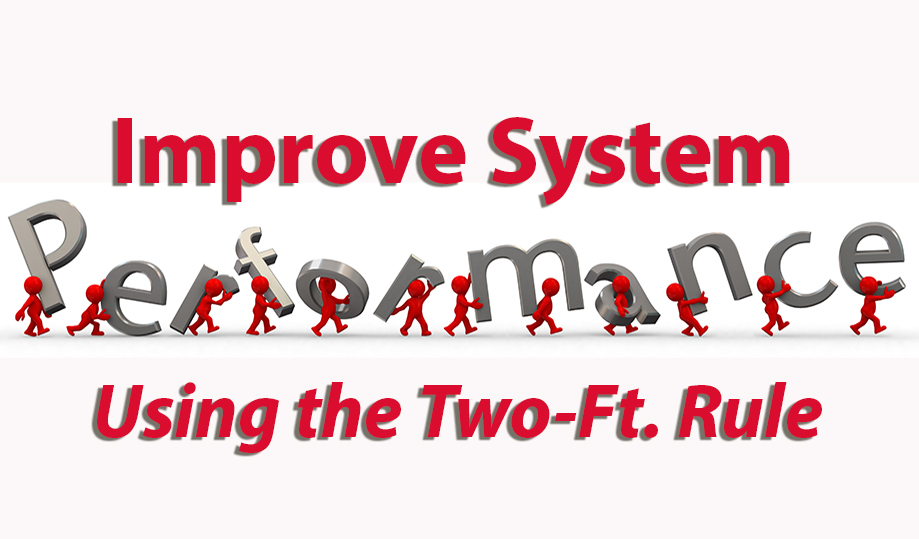 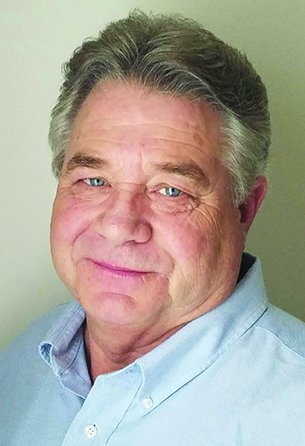 Sometimes our industry spends more time focused on equipment than on how to deliver comfort into living spaces efficiently. This article details a common rule-of-thumb based on the physics of air movement in a duct system that has all but been forgotten.

“We Have Always Done It This Way”

Most HVAC contractors, depending on their geographical location, have a standard duct system type they use when installing equipment — usually during the initial new construction phase. Currently, local jurisdictions may require a Manual J, Building Heat Loss/Heat Gain calculation, and sometimes a Manual D, Duct System Design drawing. This development was not common 20 years ago. 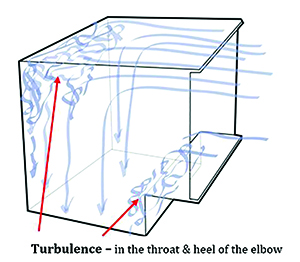 Many contractors assume the duct system is sized and installed correctly according to the local code. They also assume that the HVAC equipment is producing and delivering the “correct amount of air” to the duct system. This assumption can lead to ductwork going untouched for decades. Then, when a contractor is confronted with an airflow issue by the customer, he takes out his trusty Handometer, holds it over the register in question and agrees with the customer.

Then he says something like, ‘All we have to do is add another outlet in this room or maybe a return. If that doesn’t do it, we’ll increase the fan speed if possible.’

Don’t laugh, a lot of us are guilty of having done this – even me.

What Most Customers Believe

Typically, customers believe comfort/air issues are an equipment problem. The customer calls a contractor and tells the customer service representative, ‘I’m thinking about replacing my HVAC system, when can you come over?’ A comfort advisor shows up promptly and the homeowner says,’ I was talking to my neighbor and they had a bigger unit installed. I think I need a bigger unit!?

The truth is, until the system is examined and tested, no one has any idea what the problem might be. Performance-Based Contractors’ are trained to verify equipment is sized correctly for the home and conduct static pressure tests to show customers that oftentimes the equipment isn’t the culprit. In fact, it is often the duct system attached to the equipment that is causing the problem.

Unfortunately, we as contractors have trained customers over the years to accept poor airflow. Rooms over garages and bonus rooms are usually the worst, but the upstairs in a two-story house is typically five to 10’F higher than the first floor. Installing contractors usually lack knowledge about airflow, don’t have a room-by-room Manual J and/or D, or they use too many rules-of-thumb in duct design. They also most likely never used any airflow testing protocols like NCI’s AirMaxx’ app, Air Upgrade Worksheet, or ComfortMaxx Verify’ software. This leads to what happens next.

What Causes the Airflow Issue?

These two elbows shown above have the same restrictive throat even though one has a radius heel.

A common airflow problem comes from high static pressure in the ductwork which causes ‘turbulence.’ Turbulence is the physics of airflow that shows how air rolls and tumbles through the duct, almost like a ‘corkscrew.’

The combination of air rubbing against the wall of the duct (resistance) and turbulence in the air stream itself creates friction loss. This friction loss shows up in poorly designed duct fittings because transitions are too short or because of square-throated elbows.

How Do We Fix This? The Two-Foot Rule

The air from the supply side converts from velocity pressure to static pressure so it can disperse into the branch runs. This turbulent flow pushes against the sides of the duct and creates static pressure. Whenever there is a directional change in airflow, from either an elbow, transition, take-off, etc., it takes 18 to 24 inches from that airflow change to ‘re-pressurize’ the duct and resume the turbulent air movement.

This pressurized air then comes upon a take-off for a branch runout. The air escapes down the branch and the turbulent flow stops and smooths out. Technically this means it loses some pressure. The air now has to re-pressurize to regain its turbulent flow so it can continue to push its way down the duct. It requires about 24′ or two feet to do this. This is the ‘Two-Foot Rule?. 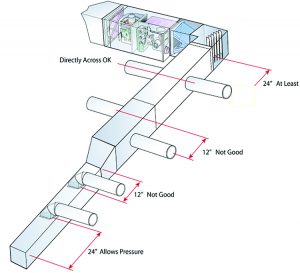 Ideally, you should allow at least 24′ between takeoffs and at the end of any duct run.

When asked, ‘which is better, to put take-offs directly across from each other or to stagger them,’ most students say to stagger them. This is correct if the stagger is 18 to 24′ on center from each other. Look at the diagram.
If you place take-offs too close together, less than 24′ on center, or too close to an air change (elbow or transition), the air doesn’t have time to re-pressurize and create the appropriate turbulent flow.

Where Do You Put the Last Take-Off in The Trunk Duct?

It is safe to say that most installers know to never put an outlet in the end cap of a duct system. So where do you put it? Two feet from the end. There are two ways to address this issue in duct renovation. You can move the take-off upstream by 24′ which is labor intensive. The second way is to remove the end cap and add 2 feet of duct and re-attach the endcap. This is usually simpler. You have to decide which is more cost effective.

The type of installation common to your area may not accommodate this rule. If you have a system with remote plenums or an extended plenum that is 6 foot or less with multiple branch runs, this rule may not work. NCI suggests that the installer use NCI’s Duct Design Tables, NCI’s Guide to Enhanced Duct Installation Practices, and your company’s duct installation procedure to fix the problem.

The goal of this article is to raise your awareness of turbulence in the ductwork and how it affects air delivery through restrictive duct fittings. It’s also to show how spacing takeoffs for branch runs using the Two-Foot Rule will relieve unnecessary pressure on the fan.

Customers want to be comfortable and do not understand our technical terminology and testing processes. Our job is to give them options based on testing and reviewing the system. Using the “Two-Foot Rule’ on your next project will lead to greater customer satisfaction and a sense of pride of a job well done.

John Puryear has a background in duct design, sheet metal fabrication, and installation in both commercial and residential HVAC. He currently serves the industry as an instructor for the National Comfort Institute (NCI). If you’re a contractor or technician wanting to learn more about duct airflow, design, or renovation, contact John at johnp@ncihvac.com or call 800-633-7058. 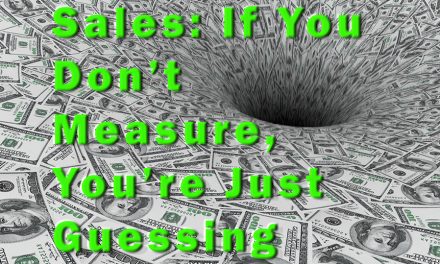 The Art of Measuring Sales Performance 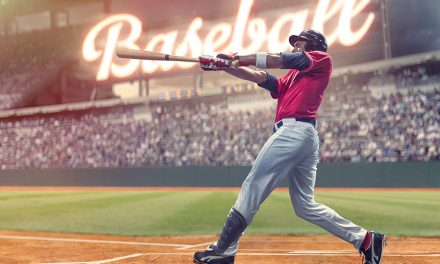 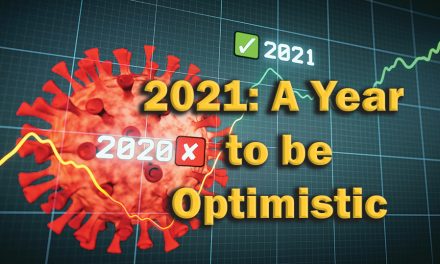 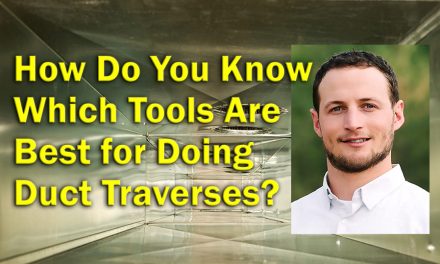 Duct Traverse: The Right Tool for the Right Job 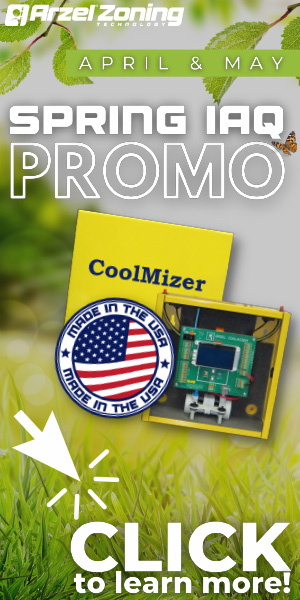