Thirty-four years ago an HVAC contractor/entrepreneur named Harold Goodman thought that manufacturers just weren’t focused enough on their dealer-customers. He made the decision to create a manufacturing operation to build HVAC products that were high quality and affordable. Today the company he envisioned is one of the largest manufacturers of HVAC products for residential and commercial use in the world. And staying true to Harold Goodman’s vision, the company remains one of the most dealer-focused manufacturing operations in the U.S. today. 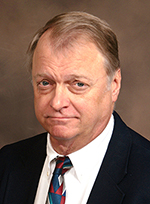 “We will revolutionize the Heating and Air Conditioning industry with the highest quality equipment manufactured by the best producing work force in the business and sold at the lowest prices in the market.” ‘Harold Goodman, founder

A big part of that focus is on training according to Mike Henson, director of strategic alliances for Goodman Manufacturing. “Goodman has always believed that the contractor is the prime driver in the sales channel,” he says. “That belief was the reason Harold Goodman founded the company and remains the mantra of the international powerhouse that Goodman has become today.”

Henson, who entered the HVAC world when he became a sales trainee with Amana in 1981, became part of the Goodman history when the company purchased Amana in 1997. “I’ve basically been with Amana/Goodman for 35 years and have been the director of strategic alliances for the past 16 years. This is the best job in the world!”

One reason? “The people,” he says. “Contractors are the greatest people in the world.’ In my mind they are true entrepreneurial heroes. And yet there is a tendency for the industry to isolate contractors. I think the industry should be banding together to face all the common issues in not only the local marketplaces, but the national economy as well. At the end of the day, we are all in this together.”

Henson points out that the Goodman evolution always revolved around an improved end product to make it easier for contractors to buy and sell. Harold Goodman wanted to provide equipment that dealers said they wanted and he and his family strove to do just that ‘ making improvements in how you deliver affordable cold air to, initially, the sweltering Southwest marketplace.

“Once they got to a certain level, they had to bring in another component,” Henson explains.’ “The first component was Amana. When they bought the Amana HVAC and appliance divisions from Raytheon in 1997, they brought one of the first ISO 9001 manufacturing facilities into the HVAC industry.’ Many new quality improvement processes came from that Amana purchase.”

Henson says there were concerns in the industry that this acquisition would negatively impact Amana.”? But that didn’t happen. He says what did happen was that Goodman and Amana both became world-class manufacturers.

“It was a revolutionary change for Goodman and our market share kept going up, up and up,” he adds. “It wasn’t just the Amana side that grew — the Goodman side grew even more. That was when the people said, ‘this stuff just works.'”

In 2004 the family sold the organization to an outside investment firm called Apollo Equities and that marked the end of the Goodman family involvement in the business. From that point until 2012 the Goodman Manufacturing Co. continued to grow and gain market share while maintaining their quality standards and HVAC contractor focus. When the international Japanese air conditioning manufacturer Daikin Industries bought Goodman in 2012, the combined organization became the largest HVAC manufacturer in the world.

In September of 2008, National Comfort Institute purchased the International Service Leadership organization and adopted their vendor program. It was at this time, according to Henson, that Goodman became partnered with NCI. Goodman had been part of the ISL vendor program since 2003 (Amana was in the ISL program since 1999).

Why is this important? For one, Goodman has been partnered with NCI for eight years and Henson says that is because of the organization’s unique training spot in the industry. “NCI provides solutions to some of the key issues in the HVAC market.’ I am talking about quality training that helps HVAC contractors provide consumers what they need — properly sized and designed HVAC systems.”

Secondly, he says for Goodman, partnering with a third party training organization makes more sense than spending millions on reinventing the wheel. “If we reinvent the wheel,” he explains, “those dollars would then have to be reflected in the cost of the equipment. Everyone wins with our relationship with NCI!”

He adds that the concepts of Performance-Based Contracting’, as taught by NCI, makes tremendous sense from a manufacturer point of view. Besides helping to cut down on the number of warranty issues often associated with poor installation and service habits, he sees Performance-Based contracting as a revolutionary tool for a contractor to help differentiate their company’s services and products as well as deliver great performance and efficiency to the homeowner. 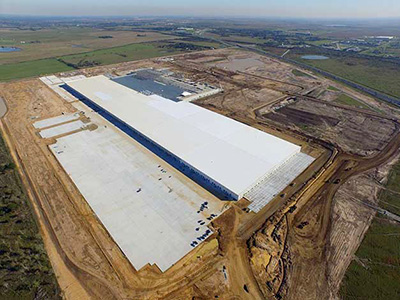 Daikin’s new manufacturing and distribution center in Houston will be home to nearly 3,000 workers by January 2017.

After acquiring Goodman, Daikin began doing something virtually unheard of when foreign companies buy American ones ‘ they began investing in the American factories. They increased the size of the Houston manufacturing facility and began hiring more people. They began building their products here instead of importing them from Japan. And this year they have nearly finished building a four-million square-foot manufacturing and distribution facility just outside of Houston.

“Daikin is investing in seven brand new product lines in the new facility ‘ a 500-acre manufacturing and distribution facility located in Waller, TX. Though all the production lines aren’t completely online yet, Daikin is moving testing labs and engineering into it as we speak. By the first of the year there will be at least 2,500 to 3,000 people working there,” Henson says.

The Daikin building will have a 1.8-million-square-foot distribution center, 1.7 million square feet of manufacturing space, a 196,500-square foot-mezzanine, 231,598 square feet of lab space and 202,600 square feet of office space. 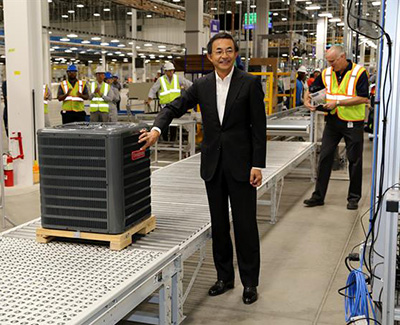 Daikin’s new manufacturing and distribution center in Houston will be home to nearly 3,000 workers by January 2017. On the morning of October 17, 2016 Daikin celebrated the first unit coming off a line at the new Daikin Texas Technology Park! Goodman Global CEO Takeshi Ebisu placed the Goodman badge on the unit.

Henson adds this is a half-billion dollar investment that provides the Goodman/Daikin team a competitive advantage from a logistics standpoint as well as a productivity standpoint.

“Plus we’re building in America. Daikin has no intention of moving production to Mexico or anywhere else. They are investing right here.”

One additional note: Henson says it’s a little known fact that in addition to building the Texas Technology Park, Daikin has also invested in road improvements to connect Route 290 to the plant to make it easier for employees to get to work. And they did all of this without a single cent of government money or tax incentives!!

The Mission for Us All

As Daikin is investing in America and American workers, Henson believes the HVAC industry needs to do the same ‘ especially when it comes to bringing young people into the industry.

Henson states there are issues (regulatory, demographic, and economic) that are common to manufacturers, distributors, and contractors that, as an industry, must be faced together.

“One of them is the lack of new people coming into this industry,” Henson adds.

The truth is that the HVAC trades offer much to be desired for young people from a technology viewpoint. But there is no Industry-wide recruitment plan. Henson doesn’t think we need a cookie-cutter approach, “but we should change the way we think about recruitment and what we do about it,” he says.

He says he recently read a study that said for every three people who leave the HVAC industry, only one person is coming in. “So the competition for qualified help will be more intense and it puts everything into a win-lose situation. What does that do to the homeowner?

“Without a doubt the biggest thing for contractors today is to capture and retain as many customers as they can,” Henson adds.’ “The market is full of unknowns and there are always going to be new and sometimes game-changing events. Without a large and loyal customer base, your company becomes vulnerable to the volatility of the changing business environment.’ New and more customers are your greatest insurance. And that should be the mission for every contractor out there.

“We need to be driven to not only revolutionize the HVAC system technology, but like Harold Goodman; we all need to focus on helping contractors be successful. After all, they really are the HVAC market drivers,” Henson concludes. 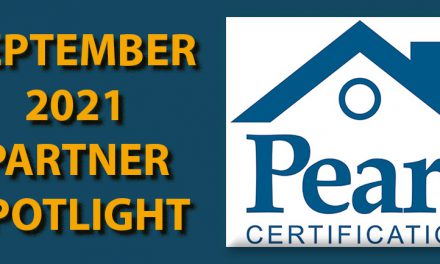